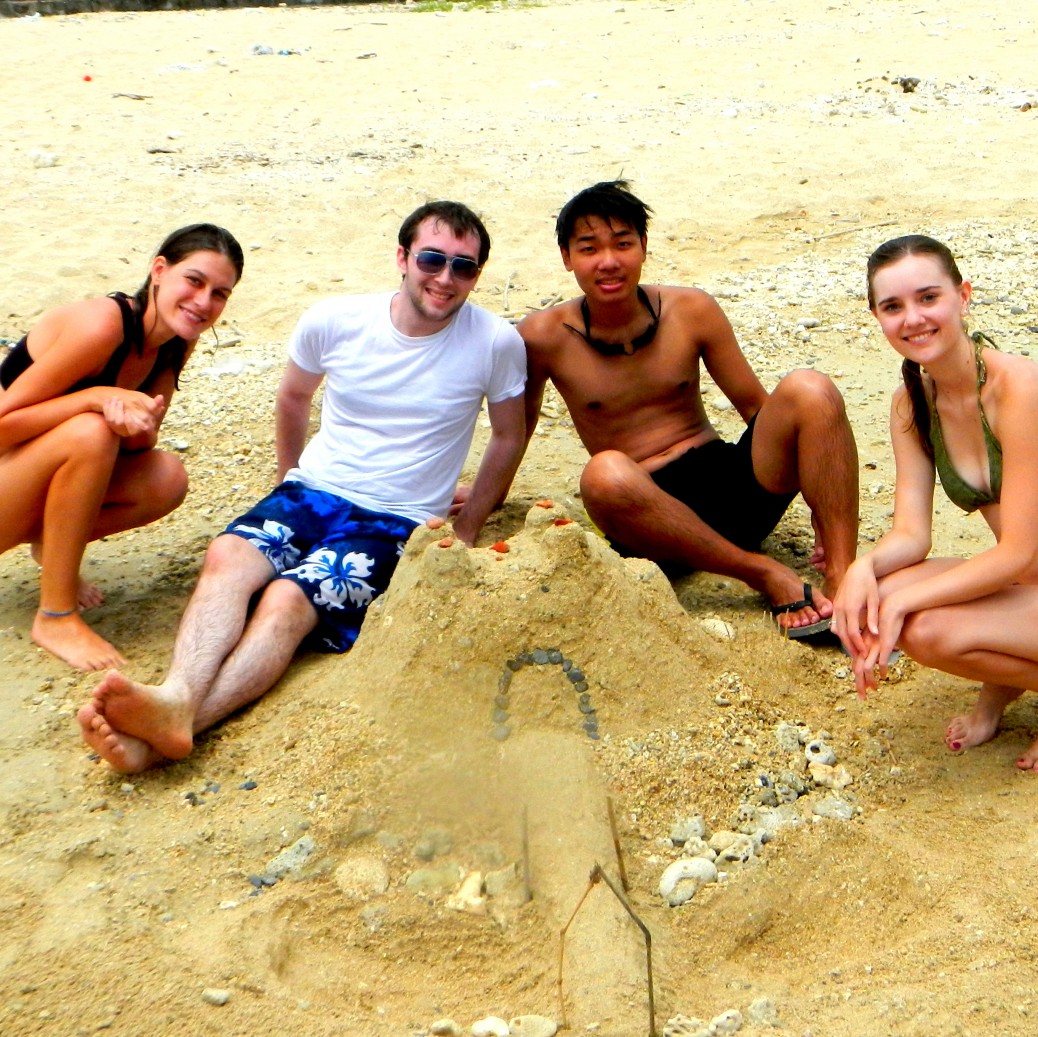 So Nicole, Youming, Kevin and I packed up for a weekend in Xiao Liuqiu. We booked so late that every hostel was already filled to the brim except one, so we grabbed the last available room on the island and headed out.

After taking a bus to the coast, we hopped onto a ferry. Twenty minutes later we were docking at Xiao Liuqiu, met the owner of our hostel, and jumped onto scooters— we zipped through the crowded streets to go drop off our bags and get ready for the beach!

Then things went… not-according to plan. The hostel gave us a single room with mattresses on the floor and no bathroom. That’s ok, though. We can deal! It’s like a big ol’ sleepover! So we threw on our suits, headed outside, and— a crash of thunder, and the skies decided to start crying over us.

Not to be deterred by a little thing like water, we decided to find the beach anyway. Sadly, this was no summer rainstorm. This was the tail of a typhoon. We hadn’t gone very far and the storm rolled over us, from a light splatter of drops, to a steady drenching, to a torrent. And the rains came down, down, down. Every now and then Lei Gong, the Chinese god of thunder, decided to send us false hope; the rains would subside, we’d see sunlight peeking through the drooping gray clouds, and think, “Now for a day at the beach!” And then the clouds would boil and the rains would pour out again.

We drove across the island, thinking we could maybe outlast the rain. During one of the storm’s long breaks we found a beach, snapped some pictures, and ran out into the waters. We picked the wrong beach. This one was home to all the neighborhood sea urchins, which Nicole promptly stepped on bare-footed. She limped back to shore. And then it started raining again.

We kept hoping. But after another hour of plowing through the waters (which were flooding the street by this time), and trying to see with heavy raindrops stinging our faces as we drove, we decided enough was enough. We raided 7-11 and added piles of junkfood, drinks, and cards to our arsenal, then headed back to our room for the evening where we waited out the storm.

The next day things went better. The sun was out, though the sky was hung with threatening clouds, and the wind reminded us we weren’t guaranteed good weather. We found a beach, and finally had the afternoon we’d been hoping to find. Nicole and I swam, did hand-stands, confused the locals, and took pictures. Kevin and Youming met the challenge of nearby children and built a big sandcastle. Nicole decided to become obsessed with finding seaglass. Youming and I laid in the surf and the sun. Kevin kept working on his sandcastle. After a long and lazy afternoon, we drove around the island once more (a very different experience when you’re not being drenched), and stopped at the “tourist spots” for pictures. The island really was beautiful. I’m glad we had at least one day to appreciate it. That evening we had to pack up and head home.

It was an interesting weekend, but by the end of it we were all glad we had gone. Even if things hadn’t exactly gone according to plan. But that’s one of the “things” about travel. Nothing really ever goes according to plan— and that’s ok. It makes life far more interesting.

In other news, we named our cats: Lyssa and Bear-Opossum. We’re pretty fond of the names. Our opinion of the cats, however, changes day-to-day, depending on how recently they’ve peed on a bed.

The last 2 weeks I’ve had a friend here from Ireland. He got the grand tour of Southern Taiwan— I’ll write about that next time.

7 Comments on “Xiao Liuqui… and Rain”