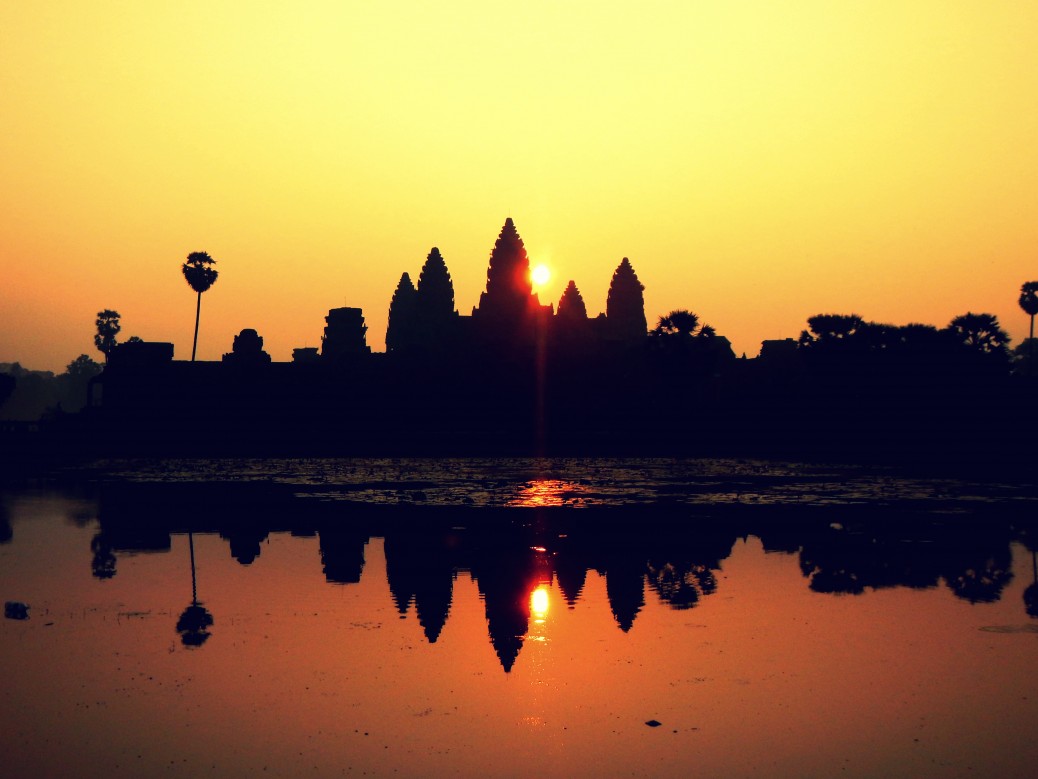 Why Cambodia Deserves Our Attention

I didn't know much about Cambodia, but it was a new place to see and that's usually a good enough reason for me to want to go somewhere. Plus, there was Angkor Wat to explore, and seeing the Wonders of the World is high on my bucket list. But Cambodia was different-- I came away from it with new eyes-- a new understanding of the lasting effects of tragedy and war, and of the vibrancy and life that can rise from the ashes of death.

In 1975, Cambodia suffered four years of genocide at the hands of the Khmer Rouge, a Communist dictatorship that grabbed power during the Vietnam War. Under their rule of terror, around 2 million Cambodians were executed or died of starvation. Professionals, intellectuals, artists, writers, teachers, former government employees, urban workers without farming skills, and anyone not ethnically Cambodian were targeted, tortured, killed, and buried in mass graves.

But despite the horror that Cambodia suffered through, a new generation has surged to life. The average age in Cambodia is only 21 (only about 3% of the population is over 65), and that youthfulness is ever present in Cambodian society. People in Cambodia are filled with an energy that is exciting and contagious. They want to change their situation-- and they work hard to do so. The Cambodian economy is small, but at a growth of 8% annually, is one of the fastest growing economies in the world.

Children are everywhere, both at play and at work. Many begin peddling street goods at very young ages (and it's sadly best not to buy from them-- it encourages parents to have their kids at work rather than at school), and it's a common sight to see them cooking, cleaning, and farming. But just as often they are running and making up games, laughing and chattering, everywhere you go. They smile and wave and watch with curious eyes.

A young monk outside his home

Hunting for fish and frogs

A boy and his mother

In every country in Southeast Asia, you get accustomed to being harassed in marketplaces by overeager vendors. You learn to tune them out. Being shouted at by people who are willing to charge you outrageous prices for cheap goods all day, every day, can get frustrating. But I didn't mind it in Cambodia. Sure, they were shouting and bargaining and overcharging, but it wasn't quite the same. They smiled. And not the smarmy, 'Oh trust me, this is a good price' smile you normally get, but a 'Hey, you want to buy, I want to sell, let's work this out' smile. It makes a difference.

And they laugh. They have a great sense of humor that actually bridges the culture gap. (So often in Asia the things that expats find funny are very, very different from what the locals find funny... sarcasm, for example. That one translates great, let me tell you.) We would hire tuk tuk drivers for the day, and at the end of it we'd be friends making dinner plans and joking back and forth. The people are young, filled with spirit and a drive to change their own world, and they are fun.

Laughing with a young merchant

Cambodia still has many problems, key among them is politics. Just this month there have been protests in the capital over political corruption and unfair elections. But the people there continue to rally and strive for better things. I have a great admiration for Cambodians, as I hope is blatantly clear.

Nicole and I spent our time in Cambodia in Siem Reap, which is where the incredible ruins of Angkor Wat are located. Siem Reap reminded me of an Asian version of New Orleans. Wide streets lined with restaurants and bars and stores selling bolts of cloth, brass jewelry, and colorful paintings of the ancient Khmer temples. And hippie pants. Hippie pants everywhere. Nicole and I both became great supporters of the hippie pants while we were in Southeast Asia.

We toured Angkor Wat for two days, getting up in the dark before morning to stumble into a tuk tuk and drive to see the sun rise over the ancient temple. The crowd was sleepy and silent at first, but as the sun peeked over the temple spires, the hum and energy of travelers discovering something new grew into excitement to match the beauty of the morning.

We walked hundreds of passageways and stairs, corridors lined with stories, old gods and epic battles carved into the gray-green stones. At Angkor Thom we gazed up into the colossal faces of timeworn kings, keeping watch over their Khmer empire for centuries. At Ta Prohm we scrambled over sprawling, ancient roots buried  into the heart of the temple.

The carvings of Angkor Wat

The faces of Angkor Thom

The trees of Ta Prohm

But it was Beng Mealea that inspired the most awe. It isn't with the other temples; you have to take a two hour tuk tuk ride out of Siem Reap into the countryside, but it is worth the drive.

It's an ancient temple, like the others, but unrestored and reclaimed by the jungle that has grown up around it. Here we explored crumbled ruins, climbed vine-covered trees and toppled towers, and best of all we had the place to ourselves because most tourists don't take the time.

There is one hall in Beng Mealea that, if you catch it at the right moment in the morning, has a beautiful secret. The hall is dark from end to end, but for a few minutes each day the sun pierces through a small hole in the roof and you can cup the sunlight in your hands, a glow of warmth in the darkness. We were lucky that day and showed up just as the light streamed through, and it was gone as quickly as it appeared.

Cambodia is beautiful. It is vibrant. It is filled with young people hoping to build a future much brighter than the troubles of their grandparents' past.
Cambodia deserves our attention; it certainly has mine.

4 Comments on “Why Cambodia Deserves Our Attention”