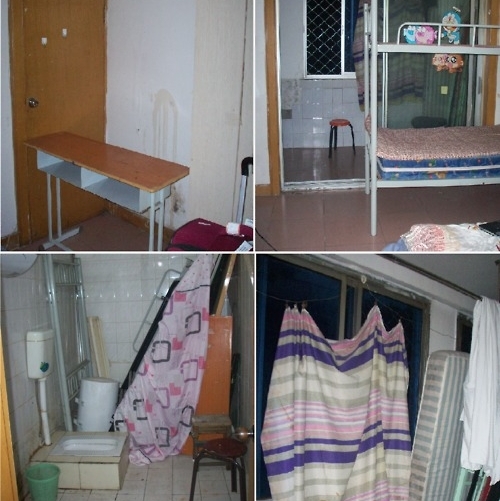 I got off the plane at around midnight and was picked up by a host from the university. He was there to take me to a hotel, then help me adjust to life in China in the following weeks.

We drove for about an hour to get into the Haidian district, near Renmin University. We pulled up to an alleyway at 1 am. It didn’t look much like a hotel, but this was a man sent by the university. Surely I could trust him? So he helped me lug my massive suitcase down a dark street, into an unmarked building, up a creaky elevator, and through a trash filled hallway where a woman was standing. He had me pay the woman, then showed me a room and he left.

I stood there for a few moments, just taking in my surroundings. There was no lock on the door, so step 1 was to barricade the door. The room was filthy and stinking. I wondered how I’d managed to end up there. The bed was unmade, there were suspicious red stains on the curtains, piles of junk in all the corners, actual human crap on the bathroom floor, and an assortment of broken furniture strewn about the room. But there was nothing to do about it. The only person I knew in Beijing had just left me there. I had no phone. There were no taxis outside, not that I would have had anywhere to go in the middle of the night. So I adjusted and accepted the fact that I was there. I cleaned up, got ready for bed, laid a few towels down over the sheets, and tried to sleep.

But I woke up scratching at sharp itches that covered me from head to toe. I flipped on the light– dozens of bugs fled to hide in the darkness. The bed was infested.

I lurched out of the bed, bagged my clothes in an airtight plastic bag, took another shower, and sat on the desk all through the night. I finally ended up dozing off, but kept waking up from fitful nightmares of insects crawling on my skin.

By the time 10 am rolled around I was in a horrible mood. That’s when my host showed back up. I immediately told him I could not stay another night at the ‘hotel’ that he’d put me in. He tried to argue, “No, no, this is a good place! You’re here for four nights!” But I wasn’t having it. I demanded to go to a new place. He finally conceded. The woman who I had paid the night before showed up, and he told her that I was going to stay somewhere else.

She was livid. She screamed! He cowered, but then he argued. For the next 30 minutes I listened to them shout at each other in Chinese. I was too exhausted to understand what they were saying, but I finally just offered to pay for the remaining nights— I wanted to leave! I handed her the money. She stared at it, then tossed it in my face. Her shouting continued.  She demanded that I physically stay there the remaining nights, and she refused to take my money. My host finally decided to put an end to the argument, and he called the police. As soon as they were involved the woman started to back down, and finally agreed to let me go.

And so I left, lugging my suitcase through the trash-filled hallway, down the creaky elevator, and into the free light of a Chinese morning.

2 Comments on “Bad Start in Beijing”