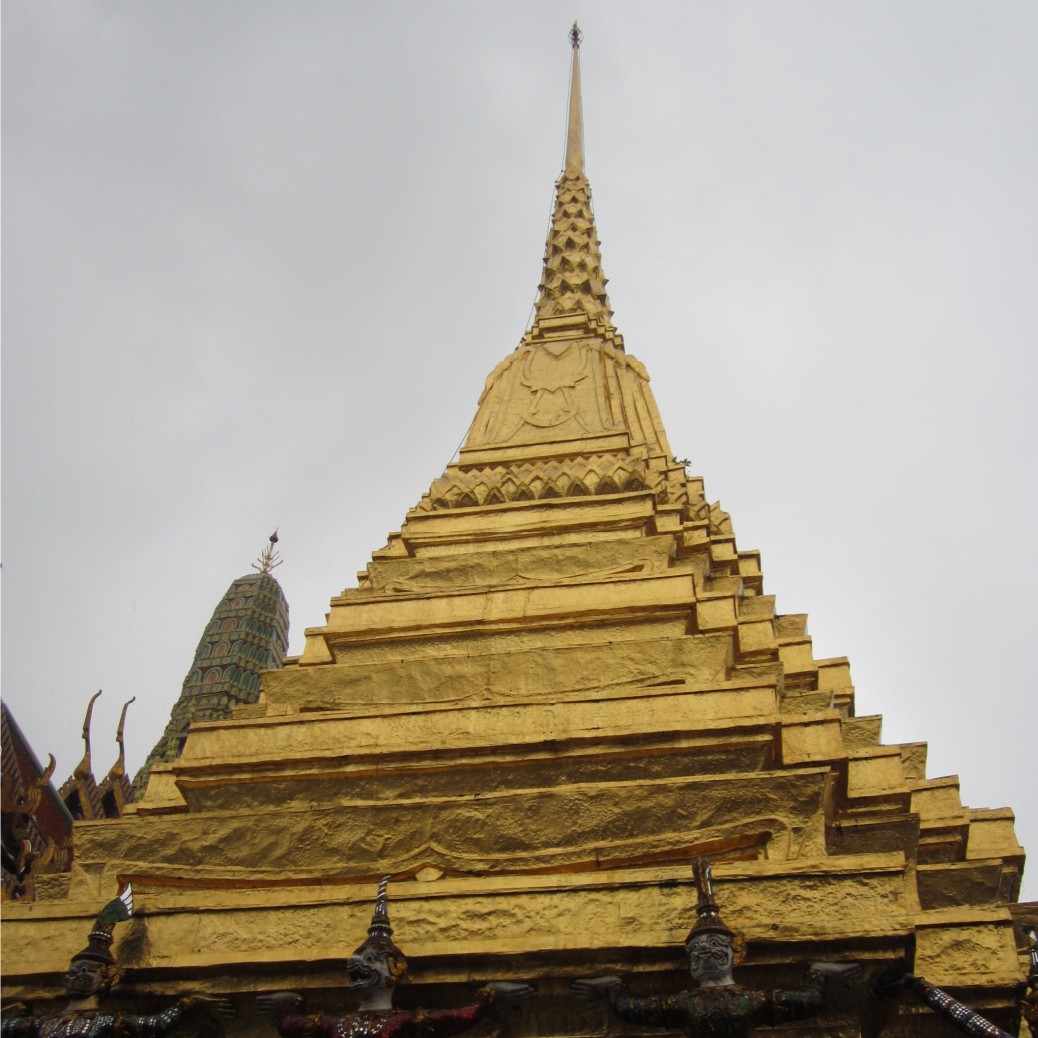 Thailand and the Terrible, Horrible,
No Good, Very Bad Bus

With Taiwan sadly in my rear view, I went to Northern Ireland for my friend Amy's wedding and a brief respite from Asia. Home-cooked food and people I love like family made it a great week.

From Ireland I headed back east and landed in Bangkok, Thailand, where Nicole had just flown in from Greece. With my other half back in place, we were ready to spend the next few months exploring Southeast Asia.

We hit some of the tourist spots -- saw the royal palace, Wat Arun, rode up and down the canal on a taxi boat, and got scammed by a Tuk Tuk driver. But this wasn't our time for Bangkok (that came later!), this was just a time to get ready, to reconnect with being back in Asia.

We spent less than two days in Bangkok, bought a few essential items that we'd need on our trip, ate a lot of curry, looked at maps and decided where we'd be heading, and tried to make a rough outline of our plans. (All plans had officially been scrapped within two weeks, but we made a good effort.)

Our first real stop in Thailand was Khon Kaen, to the northeast, so we headed to the bus station late one night to catch an overnight bus, and we made a mess of it.

There wasn't a word of English on any of the signs and we were the only foreigners, despite a throng of people. As we walked up and down the row of ticket lines we noticed that each company had their own line, but we couldn't figure out which one we needed. Then a man came up to us, "Where you go?" he shouted.

He looked confused. "Where?"

He pointed to a line. We went up to the woman taking money and asked her, "Khon Kaen. How much?"

The man came back over and spoke to her in Thai and she nodded. He turned to us, "400 baht each." (We later learned it should have been 180 baht each.)

We paid her and she handed us our tickets, all in Thai. "What time?" we asked the man.

He scribbled some numbers on Nicole's ticket and walked off. "I think it says 11:30..." Nicole said, examining the ticket. "Let's go get in line."

But the concept of a line forming is an assumption we should not have made. We went down to the buses and found our platform, along with a massive shoving, shouting crowd. It was madness. A bus pulled in and fifty people all began pushing and pulling each other to get in through the door.

"To Khon Kaen? Khon Kaen??" we shouted at passengers and workers alike. We weren't getting any response, the din was too loud and people were too focused on their fight to get on the bus.

Finally one woman heard us, "No, no, you same bus as me. Not this."

We watched the racket. The bus was overflowing with people, but there was still a crowd trying to squeeze in. "Did they sell more tickets than seats??" we asked incredulously.

"Mm," the woman nodded her head in confirmation.

"So what happens if the bus is full??"

We exchanged looks and examined the  crowd of people waiting for the same bus we were. Our crowd was double the size of the one that had just fought over the last bus.

"Is weekend. Many people," the woman explained.

We pushed through the crowd and sat down on the curb, as close to where the bus would pull in as possible. Our bus was coming-- it began to steer its nose into the parking spot, and then pulled back out, drove two more spaces down and pulled in.

"Wrong spot! Go!" I shouted at Nicole. I grabbed my bag and dove into the crowd, being shoved and pulled, yanking my shoulders free and charging through. The bus door opened and I stuck my leg out, around another person, side-stepped and managed to get in the door! I was about to sit down when the driver said something in Thai and shooed us all backwards. Someone translated for me, "Wrong parking. Must go back." I was nudged back off the bus.

The crowd was rushing back to the original spot when something else was shouted by the driver, and the mass of people swarmed a table where a little old man sat, stamping tickets.

I spotted Nicole behind me. "Your ticket!" I yelled at her. She stretched out her arm and passed me her scrap of paper over several heads.

With my head down and elbows out I bull-headedly charged into the mess,  somehow managing to shove my way to the front. Everyone was waving their tickets at the man, screaming their final destinations at him. I started doing the same, but there were too many people, too many tickets. With another shove I was able to get right in front of the man, then waved our tickets in his nose, elbowing any other arms that tried to block my way. "KHON KAEN!" I shouted as loud as I could.

He never looked at me but he took my tickets, gave them each a stamp and handed them back to me.

Everyone who had managed to get their stamp (and quite a few who hadn't) were now fighting over getting through the door. I was sweating and exhausted, pressed between a few dozen others just as determined to get on the bus. I kept using my elbows and legs to squeeze through, then made it almost to the front. The crowd was stuck, too many people trying to get through the door at once. For several moments all we could do was gasp for air and push forward, then with a tumble we all moved towards the bus. I was at the door! Someone else was trying to get in at the same time, I looked over at them. It was a young man. I smiled at him, looking shy. He straightened up and smiled, and I slipped through the door.

It was almost full, but the two seats at the very front were still miraculously empty! I grabbed them, threw my bags all over them and jealously guarded my hard-earned treasure like a dragon over it's hoard. Several minutes passed with several stink eyes thrown at people who lingered by my extra seat a moment too long, and then Nicole made it on. We were on the bus!

The bus was completely full, but there was still a crowd. The driver made everyone not in a chair get off, then he filled the aisle with little plastic stools. It was open season again as those still waiting tried once more. The fight continued until every plastic stool had one (sometimes two!) people trying to get comfortable on them.

I looked out the window and spotted the woman who had first helped us. She waved and then shrugged. She would have to try again next time.

It had taken over an hour to fill,  but the bus finally pulled away. I breathed a sigh of relief and turned to Nicole, able to think things over for the first time since we'd arrived at the station. "I've read that there are different types of buses in Thailand. I don't think we did this right."

"Wikipedia says these buses are luxurious."

"Yep. But at least we're headed to Khon Kaen."

"I guess," she took a swig of her water, then considered something and leaned forward to the driver, "Excuse me, how often does this bus stop for the bathroom?"

He didn't understand so the woman behind us translated for him. Everyone in hearing distance burst out into laughter, but no one said anything.

She looked at me, "Guess that answers that."

We eventually fell into a restless sleep, me leaning on the window, Nicole half in my chair and half in hers, and the man on a stool in the aisle sitting on the other half of her seat.

Then at 3am the bus jerked to a stop. We groggily sat up, wondering why we'd be stopping in the middle of nowhere. The driver was muttering and stamping on his pedals, pulling at the gears. The bus shuddered a few more times.

He opened the door and the other bus employee got out. They tried to start the bus a few more times, still no luck. Suddenly there was a clicking noise and the bus began rolling backwards.

All the people behind us began shouting and jumping over seats, hurtling their bodies out the door. Nicole and I exchanged a quick look and then did the same thing, scrambling to get out of the backwards moving bus.

The driver managed to get it stopped again, and we all stood there in the dark as he hammered away at the mechanics. He climbed back into his seat and very slowly the bus crawled to the top of the hill, and kept moving.

Like a mass exodus all the passengers began trekking up the hill, following the road. Nicole and I were in sleepy stitches of laughter at the sheer ridiculousness of the situation as we walked the dark road in the middle of the night with the small crowd. We caught up to the now-stopped bus after a five minute walk, then had to wait while the older and slower passengers finished making their way over. The bus driver was looking very pleased with himself and indicated that we should get back on, and so we did.

At 8am we finally pulled into Khon Kaen, found a quiet coffee shop, and waited for the hosts of our first volunteer project in Thailand.

4 Comments on “Thailand and the Terrible, Horrible, No Good, Very Bad Bus”