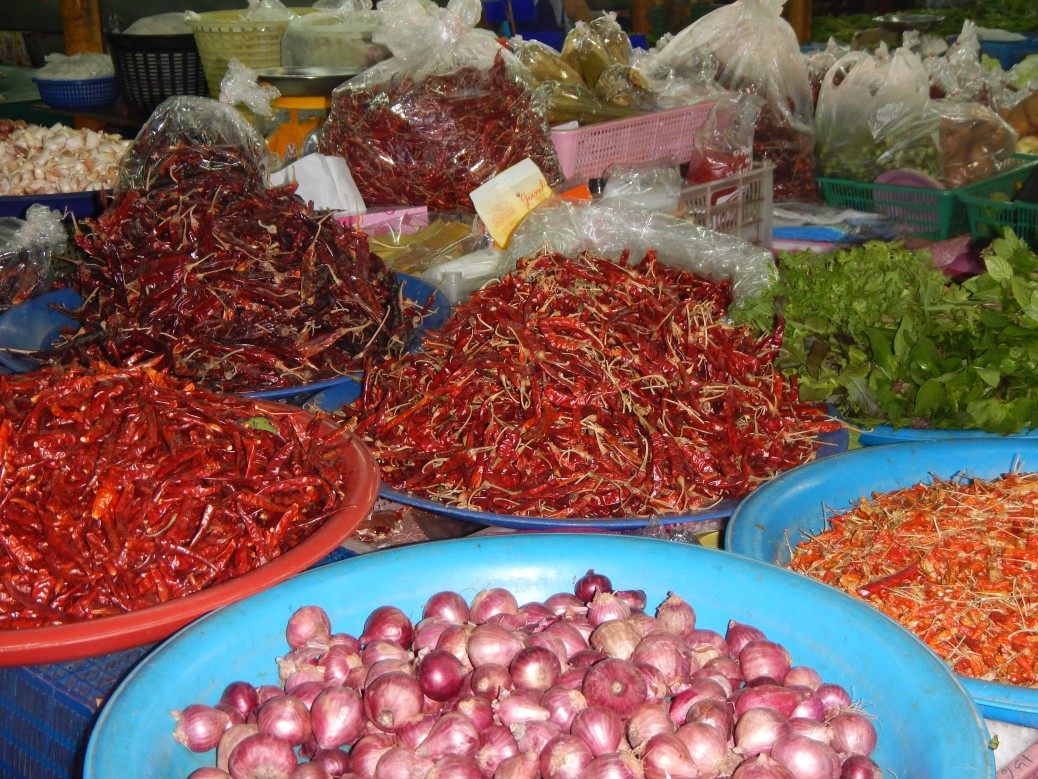 Learning to Cook in Chiang Mai

Chiang Mai is known for all its outdoor recreation. We didn't do any of that. Instead, we took a cooking class.

We headed to the Thai Kitchen Cookery Centre, where they promptly loaded us into a tuk tuk with a group of other students and whisked us away to the market.

They began our day with brief explanations of the most important spices and vegetables in Thai cooking, showed us how they extracted the milk from coconuts, and gave us a tour around all the different sections of the market.

From the strange and exotic to the simple and familiar-- there were piles of fruits and vegetables, buckets of slimy sea creatures, and a very potent area of butchered bits of meat.

We then headed back to the kitchen to begin cooking our little feast.

They divided us into groups based on what we'd decided to cook. Nicole and I split up-- since we wanted to sample as many dishes as possible we'd made sure to pick all different recipes.

With step by step instruction we fixed our different dishes. All went off without a hitch, except when Nicole's fingers slipped and she dropped a bowl, and her teacher froze and shouted-- "DON'T PANIC!" and she nodded and picked the bowl up.

By the end of the day I'd made:

And Nicole had made:

Coconut curry chicken is probably my favorite food, so I was pretty thrilled to learn how to make it. Obviously it was borderline masterful. Nicole liked her fried chicken with curry best. It was all very, very spicy and our mouths were properly on fire by the end of the day. (Keep in mind, prior to going to Thailand I was under the misconception that pepper could be considered spicy. I did a lot of growing in Thailand.)

We opted for the half day course, but later wished we'd done the full day of cooking-- had we stayed we could have learned to make an appetizer and a dessert as well. Instead we headed back to the hostel and made preparations for heading to the Thai beaches. (By this, I mean we went shopping.)

2 Comments on “Learning to Cook in Chiang Mai”