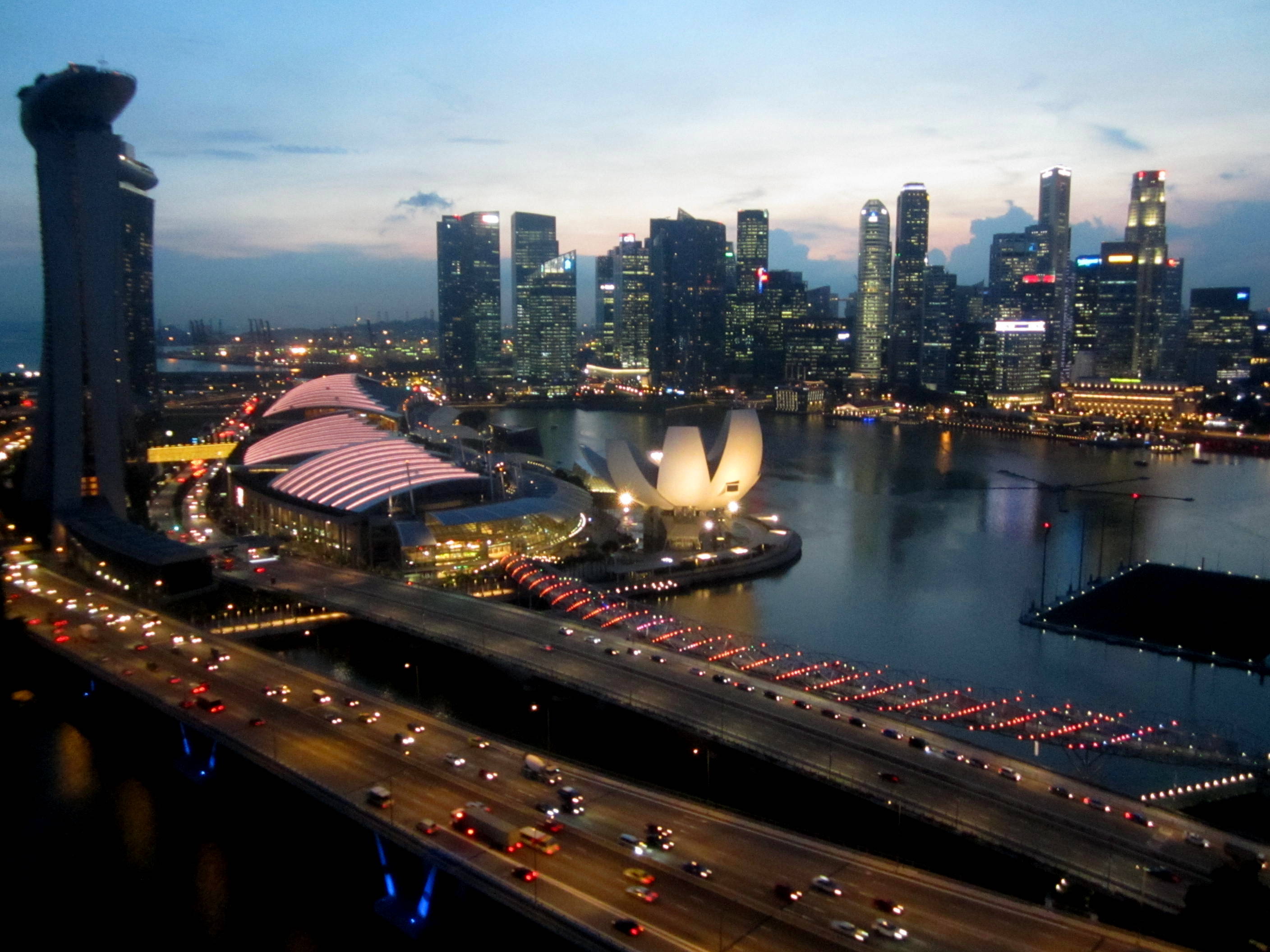 We'd arrived in Kuala Lumpur to meet our friend from Taiwan, Ronnie. But I had always had a hankering to see Singapore, and we were just SO CLOSE. So I convinced Nicole (not that it took any real effort) to make a a ridiculous 24-hour dash to see the city. It involved two back-to-back overnight train rides, sleep deprivation, a Bucket List cross-off, and a helluva lot of walking.

We caught a midnight train out of Kuala Lumpur-- a second class sleeper, which is actually a pretty great bargain if you're looking for the best way to do overnight, long-haul travel. It pulled into Singapore around 7am and we groggily made our way onto a bus and eventually to the metro station. We had absolutely no clue what we were going to see or do with our one day in the city, but that hardly mattered.

We examined the metro map and decided we'd try the Botanic Gardens stop first. Not a bad totally unprepared and uninformed decision at all! The gardens sprawl out over several kilometers and range from exotic tropical landscapes to rare orchids to quiet ponds where tranquil swans glide among waterlilies. We walked from end to end and then found a cafe for an early morning  breakfast of kaya (coconut and egg spread) on toast and coffee.

From there we hopped onto a bus and headed into the central part of the city. We wanted to see the four main areas: Little India, the Arab Distict, China Town, and the Riverfront. They're all within an area of a few miles, so we decided to hoof it for the rest of the day. It meant very tired feet but plenty of opportunity to experience the city up close.

Little India was first. There we found brightly colored buildings, shops filled with colorful baubles and sparkling sarongs, Hindu temples covered in mystical gods, meditation centers, and vendors hawking their wares.  Restaurants filled the air with sharp spices and vegetable stalls stank of wilting greens as their produce overheated in the sweltering sun.

The Arab District had a completely different feel.  Elegant mosques peered down at  immaculate streets lined with stores selling bolts of beautiful and delicate cloth, Persian rugs, and golden lamps. Alleyway walls were painted with bold street art, Aztec faces and wild designs.  Prices were notably higher than they had been in Little India, but we still stopped for a quick bite to eat.

From there we made a slow amble to the Riverfront, passing by mega-malls and the Parliament and other government buildings on our way. At the Riverfront we stopped to pose with the Merlion fountain, the national symbol of Singapore. The Riverfront is lined with restaurants, cafes and museums, but we just strolled on, aware of our limited time. Chinatown was a mix of other cultures-- it felt more like a hodgepodge of styles than a cohesive district that really reflected China. It had Hindu temples beside Buddhist ones, shops selling Thai elephants next to Chinese teapots, and spicy curry stands along with hot pot restaurants.

We'd seen most of the major areas of the city at this stage, but we weren't finished yet! We wearily made our way to Marina Bay and booked tickets for the sunset ride on the Singapore Flyer-- a ride that had long been sitting on my Bucket List. There was time to wait, so we explored the area. A colossal boat sits atop of a skyscraper and dominates the skyline here, but just as notable are the strange, enormous bird-nest sculptures that rise over the Gardens by the Bay. Twisted steel bridges and buildings with metal artistic panels that whisper when the wind passes make Marina Bay a unique mix of creativity and modernity. It's a silver city worthy of futuristic storytelling.

When our scheduled time came we climbed into one of the great big carriages on the Singapore Flyer and it slowly raised us skyward, up over the dramatic buildings and harbor waters. The sun was setting and the urban lights brought new life and vibrancy to the horizon, making the city glow in purples, blues, and gold. It was a beautiful end to a very memorable day. We sleepily dragged our worn out feet to a Hawker Center (food market) for dinner, then made our way back to the train station. We climbed aboard another over-night train; we had plans with Ronnie in Kuala Lumpur for the morning!