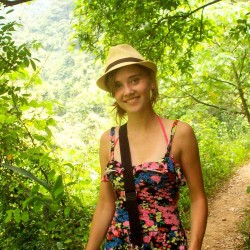 The weekend after Green Island we had an excursion to Tainan, one of the oldest cities in Taiwan. We went with our roommates, and I got to spend the day with Nai Cha. The school took us to get a nice lunch, then we went to see Chihkan Tower, which is part of the old Dutch buildings they built when they occupied Taiwan. We mostly just took pictures; some of the architecture was really beautiful.

From there we went to a drum park, where we got to see a collection of traditional drums, learn how to play a song, and watch a really impressive drum show. (Also, there were passion fruit popsicles, and they were the tastiest thing I’ve ever gotten to devour. Probably.)

Next stop was the Anping District, where we shopped at a really great street market. I finally found some souvenirs for myself, as well as a handful of people back home.

We munched on shaved ice and street food, then soon the excursion was over and people were packing back into the buses. Nicole, Dan B., Youming, and I decided to stay another day in Tainan though. So after a very confusing trek through the city, we found the hostel we were going to stay at, dumped our things, and headed back out to explore some more. We ended up getting food at an outdoor restaurant, had a good meal, then walked up and down the streets seeing Tainan, and hitting up all the 7-Elevens we passed (there are a lot of 7-Elevens in Taiwan…) for drinks and snacks. It was a late night, but we had a great time.

The next day we packed up and went out in search of waffles. There were rumors of a great waffle place, and once we got that into our heads we were on a mission. Youming’s beautiful cousin met up with us to help us search the city for the waffles. Even though it took HOURS to find them… For the record, they were some pretty delicious waffles. After that we headed back to the Anping District, where we did a bit more shopping from street vendors. I got a lemonade, a calligraphy brush, and a jade charm necklace. Then we explored Anping Fort, which is another reminder of the Dutch occupation. It was a roasting hot day, and after we circled the fort a few times we found a shady spot to sit and people watch for a little while.

Next stop was the Anping treehouse, which is very cool. There were these old buildings that were forgotten for a very, very long time, and the local trees started growing, right on top of the walls. After a hundred years or so, people realized that the only thing holding the building up was the root systems of these big trees, and now it’s a special spot in Tainan. It had an other-wordly feel to it, like something you’d read about in a story book.

We had a dinner of fantastic spaghetti, then went to the Garden Night Market, which is one of the largest night markets in all of Taiwan. I’ve never been in such a throng. We were smashed in with hundreds of other people, and moved at a glacial pace as the mass of bodies tried to crowd in between the stalls of trinkets, clothes, and food. It smelled like sweat, spices, and fried food, and the air was thick. It was amazing to see and experience, but I hope I’m never in such a crowded place again.

After the night market we sleepily made our way back to Pingtung.

Sunday was probably my favorite memory from my Taiwanese summer. We had a lazy morning and slept in. Then in the afternoon we got a group together, and after a great deal of standing around trying to organize we set out to see the three Liang Shan waterfalls in Sandimen.

It was an overcast day, and the place we were going was a good ways away; it took us half an hour by scooter, and I loved the crisp cooler air breezing over me as we drove past field after field of mango trees. The clouds began to darken, so we sped up, with the evergreen mountains ahead of us, beckoning us to reach our destination. When we arrived we quickly headed up the mountain trail. We could see the first waterfall to our left, but we didn’t stop because it was the second and third waterfalls that offered the best rewards, and we knew the clouds wouldn’t wait much longer to open up and begin to rain. At the time it was muggy and hot; you could tell that the jungle and the air was practically begging for the rain to come.

After a steep climb, a rope, and a rock wall, we made it to the second waterfall. There was a large pool of water at the bottom, and you could climb up the side of the falls and jump in. We swam and jumped and splashed for about an hour, losing track of the time and the rain clouds.

When we crawled back up to the main path we realized that there was thunder growling in the skies above us, warning that the rain had held off long enough. There was some debate about whether or not we should go the rest of the way to the third waterfall, and the group split into two— some headed back to shelter and safety, while the rest continued the slippery trek to the last and best waterfall.

Of course I was with the second group. We rushed on, but the path stopped so it required scrambling over rocks and through the waterbed. We raced our way upstream, determined to see the end.

The effort was worth it. The third waterfall was an enormous tower of plummeting water, several stories high. As we arrived the rains came, and we stood gazing up the into the sky to the top of the falls as the clouds wrung themselves out.

Without much discussion we all jumped into the pool beneath the waterfall. With deep breaths we dove down, opened our eyes, and swam beneath the swirling waters to the other side. You could sit on a ledge just behind the gushing water, and in that space gravity lost its power as droplets swirled up around our faces and our voices were drowned by the thundering falls. When we headed back the rains subsided, and although I think everyone else was pretty ready to get back and dry off, I was still loving every minute of our hike. I jumped in pools of water and slid down slippery rocks, and turned the jungle into my own playground, while occasionally hurrying to catch up to the others. Nicole found a lizard, and promptly snatched it up. I know my dad would have been
proud. The comment that was made as she showed everyone her prize was, “Tessa climbs everything. Nicole picks everything up.” We made a good pair.

For dinner we all went and got aboriginal style chicken at a restaurant on top of a mountain, overlooking the Taiwanese jungle. A few Americans (Dan and Nicole included… me, not so much) braved some of the more foreign delicacies, like the chicken heart and head. Youming happily munched away on everything. It’s not so foreign to him… but the rest of us were a bit shocked.

The trip to the waterfalls could not have been more perfect. When I arrived to Taiwan from day one I told everyone who would listen that I wanted to go to the waterfalls, and it never happened. I’m so thankful that my last weekend with the TUSA program was spent finally seeing that beautiful place, and with the people that I loved the most.