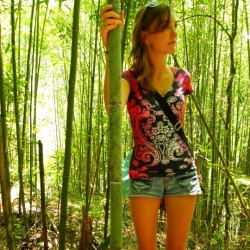 Had a great weekend with great people. But to backtrack a little bit… Thursday in culture class we learned about the aboriginal peoples of Taiwan, specifically the Amis tribe from the eastern coastline. We were also taught traditional Amis dances (they’re a very celebratory people who express almost everything through song and dance).

As some of you MAY know, dancing is not my strong suit, but considering most of the dance we learned consisted of kicking the air and following a conga line, I’d say I managed.

That evening we headed back to Kaohsiung so we could go see the character museum. It was really a neat set-up (although it took us forever to find, and so were running fairly short on time). We got lucky though, and they had a tour guide who spoke tons of english. We would have been so confused without him.

The museum was filled with artwork that represented the evolution of Chinese characters, and the artistry of calligraphy, and some pieces that were simply intended to be creative depictions of characters. The second half was all interactive, and let you design characters or play games with characters. It was all very cool.

Friday we went with the school on our second excursion. This one was to Kenting, the biggest national park in Taiwan; it’s located all the way to the south of the island, and we were at the southernmost part of the park. We went and saw the Eluanbi lighthouse, which involved a short walk up a rolling hill (and lots of trails to explore if I ever have the chance to go back). On the way down, two Taiwanese students ‘convinced me’ to roll down the hillside with them. (Ok, so it took absolutely no convincing). So we lined up and Ready, Set, Roll’ed— it was fun until I hit the bottom… and rolled right into a mud puddle. It was cute. On the plus side, it was my legs that got a nice layer of mud on them, not much of my clothes, so I literally took a bath in a sink and called it good. Taiwan’s hot sun had me clean and dry in no time. The really good news is I actually have the whole thing caught on video… When I get it emailed to me I’ll stick it up here.

From the lighthouse we headed to lunch, then to the beach. It was beautiful and the water was absolutely perfect; it was a hot day and the water was just shy of being warm, and crystal blue. All the Americans charged in while the Taiwanese hung back at first. They were smart to. There was a riptide if you headed in the wrong direction, and a bunch of the Americans got caught in it. Those who live near the coastline got out pretty quickly. Unfortunately, my education on riptides has been fairly incomplete living in the midwest, so Dan B. and Dylan (a great big ex-lifegaurd) had to finally pull me out of it. After that we were all much more careful to stay away from the stronger tides, and the Taiwanese students slowly started to brave the water. Soon we were all out there jumping over the waves and making poor attempts to body surf back to shore.

It was a good day, but we passed out on the long bus ride back to Pingtung. Not so tired that we didn’t go out that night of course.

Saturday Nicole and I were up very early (and trying to ignore our awesome decision making skills to go out the night before). We met up with Guan Guan and Pei Yi, hopped a bus, and headed to Taichung.

Taichung is the third largest city in Taiwan. (Taipei and Kaohsiung are 1 and 2), and is Guan Guan’s hometown. We had a great time, but the best part about the weekend in Taichung was getting to know Guan Guan and Pei Yi better. They are so sweet and so much fun to be with. Their mannerisms and way of bantering back in forth in Chinese was priceless. From spending time with them, we discovered that the following American sentences don’t translate well:

We spent Saturday afternoon in the shopping district of Taichung (it happens to be a big fashion and shopping city), and pushed our way through a crowded day market. Nicole found a cute swimsuit, and I found a pair of cheap aviators to replace the ones I had sadly lost at the beach the day before. We also found a stall selling ice cream inside balls of bread; we both ordered chocolate chip, and decided they are officially a dessert that needs to be brought home to the states. Nicole asked what they were called, and Pei Yi told her what sounded like “kau pu”… I reacted immediately with a horrified, “Did you just say cow poo??” No. No she did not. They’re called pau fu, and they really are awesome.

When we finished shopping we spent some time trying to figure out what to do next. After about thirty minutes of indecision, Guan Guan finally mentioned (with lots of hesitation), “Well… We do have a castle. Would you want to see a castle?” Of course we replied with a quick “Of course!” and the two of them audibly sighed with relief when we headed in that direction, thankful to have an idea we were excited about. (We were thrilled!) So we took a taxi out of the main city of Taichung into the mountains that surround it. We ended up on top of a cliff-side in a tiny little town famous for their varieties of mushrooms, and on the edge of the little town we came to Xinshe Castle. Xinshe Castle was not at all what we expected to find in the mountains of Taiwan. It is a beautiful European styled park filled with gardens and a small castle, with a lake and fountains and walkways that wrap around the water. I’m not sure what it’s doing up there, but it was surprising and unique to explore. We wandered around, took a hundred photos, then sat by the lake and ate tiramisu, blueberry cake, and sipped sweet black tea.

Guan Guan’s beautiful mother picked us up from Xinshe Castle, and took us back to the city center. We went to an overcrowded nightmarket and found some food, which we took to-go, and we looked through an exquisite temple. The best part was that Guan Guan and her mother explained all the different parts of the temple, instead of us wandering around in awed confusion like we normally do. One of the gods is called Guan Gong, and he has a red face. When Guan Guan was a little girl she would run and play, turning her face bright red; her family began calling her Guan Guan then, in honor of the red-faced god.

After exploring the temple we headed to the hotel and ordered some pizza, and crashed at the awesome room that Guan Guan’s mom and friend had hooked us up with. It was a really nice place, and our window overlooked the whole city. We sat around eating and talking about boys and gossip and typical girl-talk. (It seems to translate no matter what the language is).

At one point I picked up one of the treats that we had bought at the market, unsure what it was, curious to try it, and concerned it might be something I didn’t want to eat, so I asked Guan Guan, “Um, what is this?”

I froze, completely horrified. I had it on my fork, I’d committed to eating this thing they had bought for us. “It’s…what?”

Thank God. It was basically an oversized blob of tapioca coated in a gooey sugar. It was pretty good, but I only ate the one.

By the time we headed to bed that night we were completely exhausted. I had curled up in bed to wait for my turn in the shower, and then heard one of the Taiwanese girls beside the bed. I rolled over and found Pei Yi hovering over me with tiny bottles of shampoo and conditioner, to inform me that more would be coming. Then Guan Guan announced, “I just want to do this—” and flipped over to prop her legs up on the wall to let the blood flow out of them. All weekend it was constant cute interaction and announcements. I had passed out before Guan Guan had even finished propping her legs. The next day, Sunday, we got another early start. We headed down to the hotel restaurant and had an amazing breakfast buffet complete with waffles, eggs, bacon, and coffee. The best part was that it all came with the room… which we didn’t have to pay for. Guan Guan’s mom showed up again, and we loaded into her car and set out for Miaoli County. It was a long drive into the mountains of Western Taiwan, and Nicole and I both fell asleep (again); when we woke up we were in a rural town following winding roads that snaked up and down the cliffsides. We finally stopped at a trail head that lead into a bamboo forest. It wasn’t a very long walk before we came to a river that plunged into a set of waterfalls, and we traversed a rope bridge that crossed the rushing water. After we finished our hike, we bought fresh peaches at a small stand by the trail head, then all piled into the car again to head into the traditional little town we’d passed through on our way up to the hiking spot. We wandered a bit, bought some green tea shaved ice with red beans and tapioca blobs (a learned taste, that I’m actually really starting to like), got some lunch, and I bought a drink mix of honey and rose petals that you stir into water to make it sweet from a street vendor.

Then we headed to an art district and saw some incredible wood carvings. Wood from Miaoli is very famous in Taiwan, and I found several types of work that one of these days I’d love to have, like tables made from massive tree roots that have been polished till they shine.

By then we were, once again, completely wiped out. We headed back to Taichung city, bought tickets for the high speed rail, and were back in Pingtung before we knew it.

We captured this video of Guan Guan and Pei Yi, so you could see just a glimpse of why we like them so much: (It’s a bit hard to hear— sorry about that!)

Today we rested… And made plenty of plans for next weekend.

22 Comments on “Kenting and Taichung”