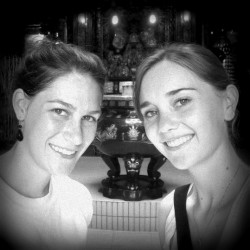 Nicole and I decided to explore Pingtung, so we hopped on our bikes (from the school, rented for the summer) and wandered around. It was a good way to get to know the city, figure out where everything is, and see parts of Pingtung that our Taiwanese friends might not be inclined to show or be interested in. Tucked in alleyways we’d find intricate and beautiful temples and shrines, which were always totally empty and hauntingly silent; we’d hesitatingly poke our heads in, anxious to see the hallowed places but hesitant to show disrespect with our flashing camera lights and excited but whispered chatter.

We ended up stumbling on a street market just in time for another gushing rainstorm to catch us by surprise, so we ducked into a store to wait out the weather. We waited long enough that we started buying things. I ended up with two new skirts, a tank top, and a pair of black high heels. When the rain subsided we climbed back on our bikes, and found a restaurant called Philadelphia, and it was entirely “America” themed. Even the light fixtures had baseballs on them, and the table tops were American flags. We ordered french fries and chicken fingers, and the excited waiter brought us some popcorn chicken on the house.

After we ate we slowly made our way back to campus, and I spent the rest of the day being anti-social, studying for a test that I had this morning. Turns out I shouldn’t have been so concerned; it was pretty simple.

Today after classes a great big group of us went to a Karaoke joint. Back home a karaoke bar is usually a seedy place… but not in Taiwan! The Karaoke place had marble floors and was several stories high. It was the fanciest place I’ve been to yet in Taiwan, in fact. They only booked rooms in 6 hour segments, and all the Americans scoffed and giggled at the mere suggestion of staying at karaoke for 6 hours. (It would be almost 5 hours later that we’d slowly make our way back out onto the streets…) Along with the karaoke came an all you can eat buffet, so we filled our plates and tried our hand at a random mix of old pop songs. I started the night by a duet with Chelsey of Shania Twain’s That Don’t Impress Me Much; by the end of the night we were all screaming into the microphone to “sing” oldies like Thriller, American Pie, and a mishmash of the Backstreet Boys, Blink 182, and Britney Spears.

We were definitely louder than the Taiwanese, but after watching how loud we could get, they went from singing love ballads to giving the Americans a run for their money in terms of sheer volume while belting out Chinese rock.

After my five hours of karaoke… (yes, it really is fun enough to last five hours if you’re partying Taiwanese style…) I went with Nicole and English-name Emily to 85 Cafe, a store down the street that has cakes and coffees, to work on some homework, and Emily helped me with my Chinese speaking. (That’s definitely what I need the most work on… I’m actually pretty good at reading it.)

Headed for bed now, and ready to crash.