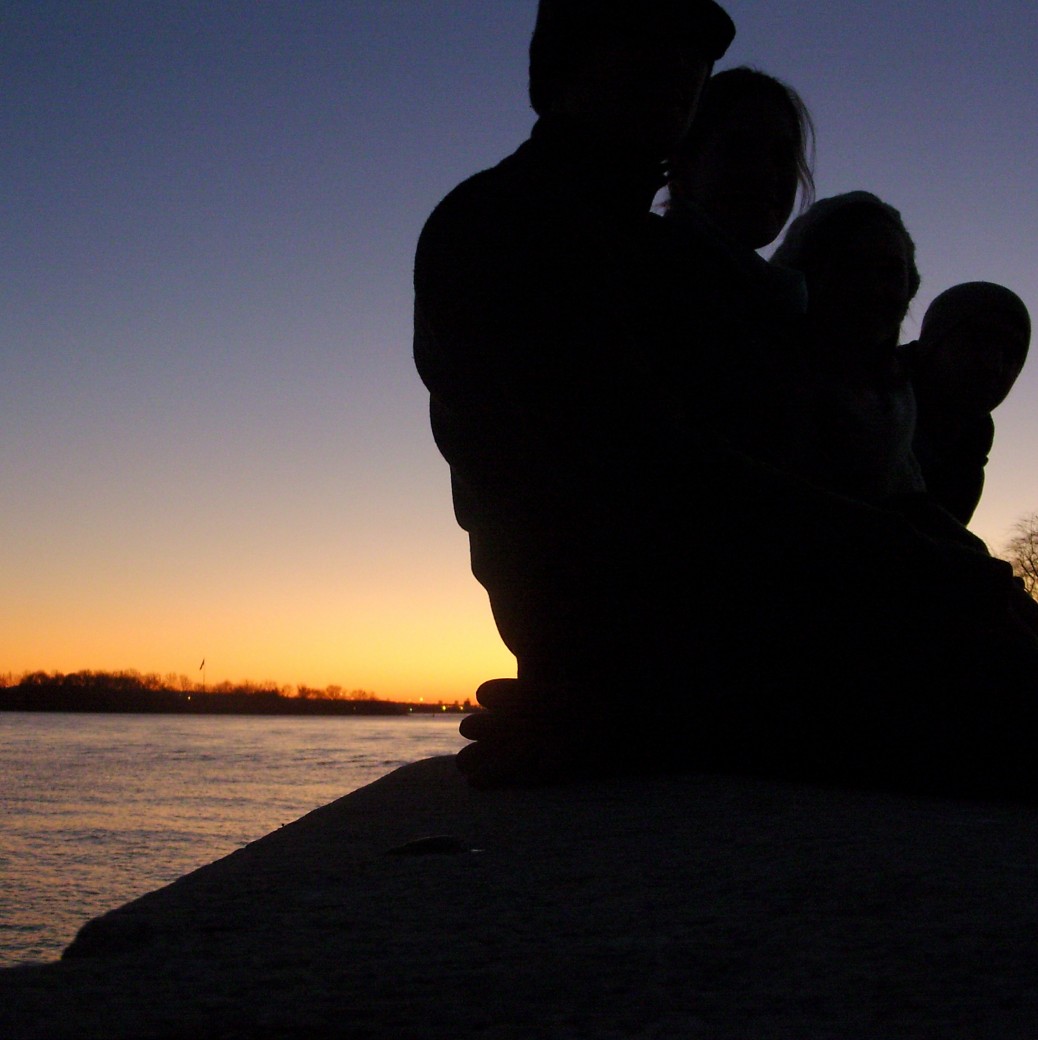 Coming home has been a whirlwind, and a good one.

I took a detour on my way back to the midwest. From Beijing I hopped a plane and found myself in New York with three of my favorite travel buddies: Nicole, Dan B and Dan R from my Taiwanese summer.

This was my first time ever to the Big Apple. Going to NY has been a trip I’d been dreaming about for years; I’ve carried around a list in my wallet of things I wanted to see in the city for about a decade. This trip had some high expectations to live up to, and it didn’t disappoint.

I made my way from JFK airport to Penn Station, where I met up with Dan B (the first to arrive). We decided to save on cash and master the subway; however, I was lugging around all my suitcases from my days in Asia, which definitely outweighed me and made for an interesting balancing act. Dan and I hit the subway right at rush hour with my massive bags, crammed into small, dirty tunnels filled with people trying to make their way home and thoroughly unimpressed with the bumbling tourists. We tried to make out the maps… but somehow consistently managed to hop on the wrong train time after time. Thankfully when I travel with any of that group, we always make things work. Dan and I managed to keep laughing about our inability to decipher the routes, as we traveled up and down the lines. A few hours later, and we actually arrived to the hotel we’d booked (which was located in China town— we thought it was the only appropriate place, really).

We checked in and dropped off the bags, then wandered the city a bit until we got a call from Nicole. She was flying in from Spain (she’d also done a semester studying abroad), and Dan and I assumed she’d need some help making it to the hotel. Nope. She was there, wondering why we weren’t. In typical Nicole fashion, she’d come prepared and made quick work of the subway system which Dan B and I never could quite figure. She was excited, ready to see the city, and deservedly pleased with her subway-ciphering skills.

My jetlag kicked in, so we called it a night (although they wandered out to find pizza after I passed out). The next morning Dan R arrived bright and early, and I woke up starving. Unbelievably ready for a real American meal after months of Chinese food. We found a little diner, and Nicole and I devoured platefuls of greasy eggs, bacon, hash-browns and french toast, while guzzling cups of hot coffee. It was one of the best meals I’ve ever eaten.

From there it was time to sight-see! Nicole had to split off from our group to see her parents, who also happened to be in New York for the weekend (and they hadn’t seen her for 6 months, so I guess it’s understandable that they stole her from us for the day).

The Dans and I headed to the Empire State Building, to peer across the New York skyline. The winter wind was pretty biting from the top story, but the view was worth the chill.

Our next stop was Macy’s; the streets were strung up with lights and garlands and holly. We grabbed hot dogs from a street vendor, and peered into the windows where animated dolls danced to Christmas songs. Then Dan found a wallet, so we pushed our way into the crowded store and hunted for a mysterious floor “1 and a half,” which we eventually found and handed the wallet over to a cranky woman behind a counter, who wondered why we’d taken the time to turn it in. Dan won her over though, with his country-boy charm.

We grabbed a cup of coffee, then a nap (because that jetlag thing was killing me), then out to find a bit of New York night-life. A few rounds of drinks in a pub, a lot of catching up on the last several months, and we hit the streets again. We found the Washington Square, which I wanted to see because I sort of love “When Harry Met Sally,” and the arch reminds me of that film. Then we met up with a friend of Dan B’s, who happened to live in the city, and we finally got Nicole back. Dan R found a philly cheese steak that I think he had a love affair with, Nicole and I got long island ice teas, which we’d decided was “our drink” over the summer, and around 4am we ended up in a diner munching on hamburgers (or chicken parmigiana, if you’re Nicole) and watching Dan B’s friend do Bill Cosby impressions. The night ended with over-paying for our taxi. It was a pretty fantastic first full day. The next morning we set out bright and early to see the Statue of Liberty. The sky was clear and bright blue, with a beaming sun overhead. The air was cold, but the day was beautiful. The ferry ride was quick, and we strolled around the park, admiring the statue, the city across the harbor, and the afternoon.

Our next stop was Ellis Island, where they’ve turned the old immigration halls into an impressive museum. We wandered through the exhibits and took in our country’s past, and soon we realized the afternoon had gone.

We stepped out to wait for the ferry to take us back to the city, and were just in time to catch the weary sun setting over the water. But just because the sun had gone didn’t mean our day was over. We were starving, so we headed back into the confusing labyrinth of a subway system and attempted to get to SoHo for dinner. Our train stopped, and at the last second we realized, “Oh! This is our stop!” So we all quickly jumped to get off, but as we turned around saw that Nicole, who had been right on our heels, hadn’t quite made the door. She sadly waved goodbye as the train pulled off, and we frantically motioned for her to call us.

Unfortunately, service is sketchy at best in the subway tunnels, and her phone was dying. So she scribbled down our numbers with the last bit of battery she had, tried to catch the next train back to the stop she’d missed, but that train mysteriously decided to skip the stop, so she had to double back yet again. I tell you, those New York subways are incomprehensible!

She finally found her way to meet us, and by that time we’d picked an Italian restaurant where we had some fantastic food. I more or less fell asleep in my dinner, so they dragged me back to the hotel for yet another quick nap. But the night wasn’t over, so we headed out to find the Rockefeller Center, which was beautiful. There were Christmas lights reaching to the sky, the enormous Christmas tree (which has made an appearance in almost every classic Christmas film), and crowds of people bundled in coats and scarves and hats who sipped hot cocoa while others skated in dizzying circles around the ice rink.

The next day required some sleeping in, but once we were up (and had grabbed another delicious, greasy breakfast from the diner), we headed out again to see more of the city. We saw Wall Street, which was under close watch and didn’t seem particularly occupied, and snapped pictures with the bull (sadly fenced off now, to avoid vandalism). Then we wandered down to Ground Zero, and spied the half-built new World Trade Centers. They’re going to be impressive.

From there we headed to Central Park, grabbed a few more hot dogs from a street vendor, and explored. It was a warm afternoon, and there was an old saxophone player playing classic Christmas songs. We bought roasted pecans and took our time seeing the park.

We found the Alice in Wonderland statue, and after quite a bit of extra effort (and a lot of insisting on my part) we found Balto as well. We decided to cut corners and wander off the sidewalk, and I got all muddy. We decided our Taiwanese friends would have scolded us, and pointed out that that’s why you should always stay on the paths.

There was a ice skating rink in the park, so we donned skates and spent the evening on the ice. The boys (both hockey players) were right at home, and they impressed Nicole and I with rounds of ridiculous tricks, moves and dances as they weaved in and out of the crowds of much less experienced skaters. The sky got dark and the city lights turned on and lit up the sky while we skated, and Christmas music blasted out of the speakers. Nicole and I belted out the songs as we skated in wobbly circles, and tried to covertly snap pictures of the guys (cameras weren’t allowed on the ice)— we were only scolded a few times. After skating we went in search of food, and passed by an ornately and ridiculously decorated building that had monsters hanging out the windows and a Dracula ushering customers into the door. It was a Dr. Jekyll and Mr. Hyde themed restaurant, and we thought it looked fairly awesome. It was really just… weird. We ate soggy burgers while strangely animated statues, masks, suits of armor and mummies told rounds of joke, and a woman performed a show which involved bringing Frankenstein to life— only to quickly take him down with a machine gun. After than unexplainable experience, we went to Times Square. We wandered through the giant toy store, admired the Broadway show signs which were far beyond our price range, and spotted a giant advertisement for Taiwan (“the heart of Asia”).

It was our last night in New York, so we found a quiet bar and grabbed a few drinks, but decided it was just a bit too quiet, so then we found a much “less-quiet” bar. Nicole and I, as you should be able to guess by now, opted for long island ice teas. I might have broken a glass with an overly dramatic sweeping gesture, something akin to a karate chop. We found gyros and hot dogs from a late night street vendor. We took too many photos. The guys gave Nicole and I piggy-back rides and we raced down the street. We slid down the hand-rails in the deserted subways, and Nicole decided to lead in a very loud, very proud round of “America the Beautiful” (we were pretty pleased to be state-side).

The next morning we grabbed one last fantastic diner breakfast, then packed our bags. Nicole and I had flights out of La Guardia, so we said goodbye to the guys and shared a taxi to the airport. We sat waiting for our flights and reflected over the last 6 months. We hadn’t even known each other when we had last been home. It was a big six months for both of us.

We said goodbye, and boarded our flights home.