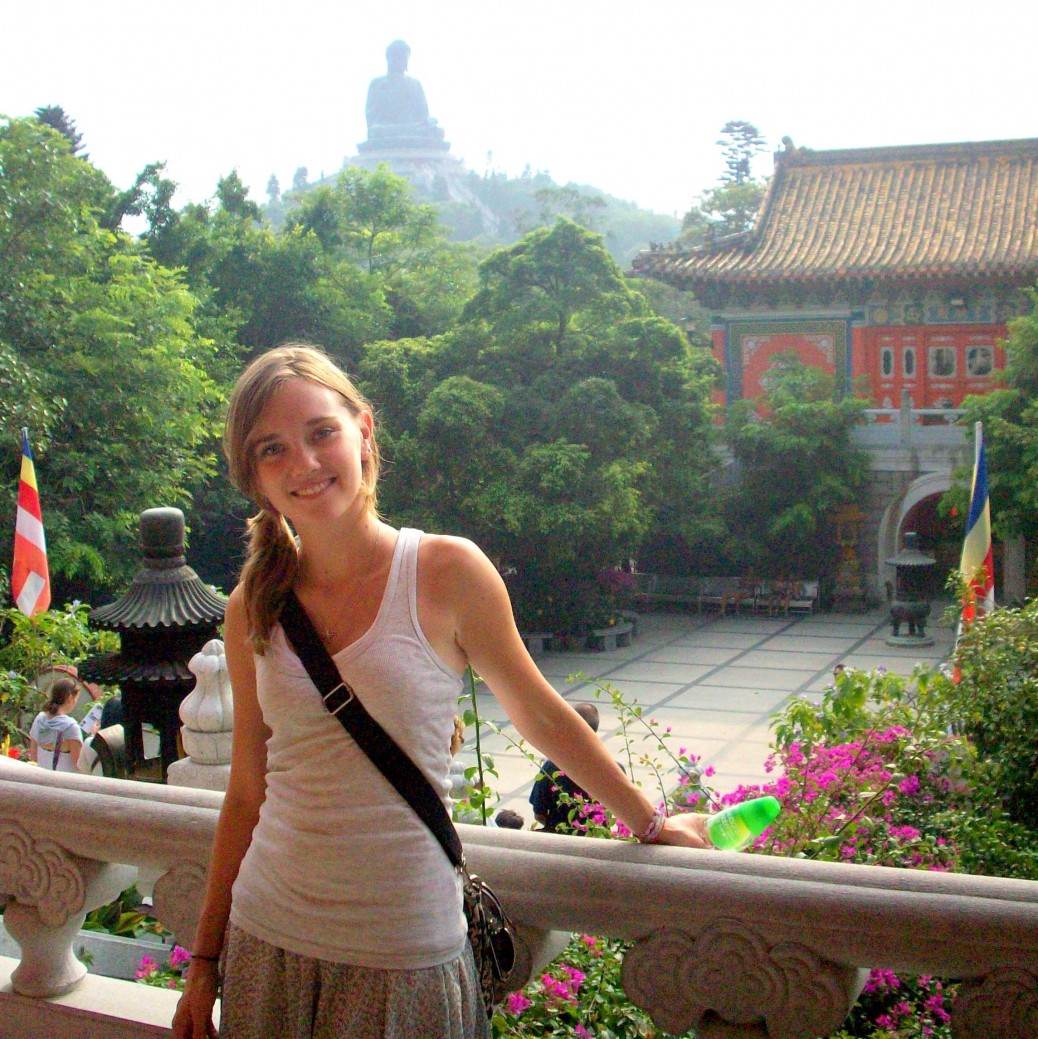 Posted by Tessa Bradford on September 4, 2011

So I boarded a plane to Hong Kong pretty unsure about my plans.

I needed a visa to enter China, but I’d been extremely unlucky about getting one figured out. Because of political reasons you cannot get a Chinese visa while you’re in Taiwan. The best option, then, is to head over to Hong Kong and apply for one there.

I had a stroke of luck right before I left Taiwan. I had lunch with Dan R and his new Taiwanese fiance, and as I told them my concerns about heading to Hong Kong alone, she mentioned that she had an American friend who lived in there. That evening I received an email from him, his name was Nick, and he agreed to meet me at the central station in HK and help me find my hostel.

I showed up in Hong Kong, stood in customs for an hour, then got on the express train to the main station and quickly found Nick waiting for me. We hopped a taxi and headed to Chungking Mansions, where my hostel was located. Chungking Mansions is right on Nathan Road, one of the main areas in HK. Inside was this busy throng of people from all over the world; I was so thankful I had Nick with me. I’d have been pretty nervous being there alone. The hallways were unfinished, there was quite a bit of broken glass and trash in the stairwells, and overall it just sort of looked like the place you didn’t want to explore too much.

Once you got inside the padlocked hallway of my hostel though, it was really surprisingly nice. So at night I would barricade myself in and I was good to go.

As soon as I had dropped my unbelievably heavy suitcase off at my room Nick and I headed over to the Chinese consulate to apply for the much sought after visa. Even with paying extra it was going to take two days to be ready, so until then I just needed to hang out. That first day Nick introduced me to Hong Kong by taking me up to Victoria Peak, a point at the top of a mountain that overlooked the whole city. It was a great view of Hong Kong, and then we took a tram back down to the busy streets.

We were on Hong Kong Island, and needed to get back to Kowloon (the north half of HK, and where my hostel was located), so we took the Star Ferry across the channel, then once we docked we stopped for some ice cream and found seats to watch the city lights; every night in HK there is a laser show on top of the tallest buildings. The skyline is what makes Hong Kong so impressive to see, and although the light show itself was only ok, the overall view of the city reaching to the sky in neon lights from across the reflective harbor is beautiful. The next morning I met up with Nick again and tried dim sum for the first time. We ordered shrimp and pork dim sum, with crispy spring rolls and jasmine tea. We didn’t get around to eating dim sum again while I was in HK, but it’s definitely delicious! We didn’t really have any plans, but we’d heard good things about Lantau Island, so that was our next stop. Once we got there we took a cable car up into the mountains to Ngong Ping. We opted for the slightly more expensive “Crystal Car” which had a glass bottom so you could see everything below you. We went across the busy Hong Kong traffic, over a channel of water peppered with fisherman scooping up their catch, and up the side of a forest covered mountain.

Ngong Ping is home to the Po Lin Monastary, and the Tian Tan Buddha. The Buddha is an enormous statue that is placed at the very top of a mountain; we could see him overlooking the countryside from our crystal car, but it wasn’t until we got up close that we realized just how big he really was.

We took our time and looked around; we climbed the 268 steps to the top of the Tian Tan Buddha, we went to the monastery and found a shady bench to rest awhile, we went into the town and poked over the souvenirs and gifts and food. Our daylight was up before we’d realized how much time we had spent. We took the cable car back into the city and grabbed some dinner, then went back to the shoreline in Kowloon to wander around a bit more under the flashing lights of the city. We walked along the Avenue of Stars (the Hong Kong version of Hollywood’s Walk of Fame), which is right along the water’s edge. I spotted Jackie Chan and Bruce Lee’s stars but didn’t recognize most of the names. Of course I also had to stop at the statue of Bruce Lee to pose for some action photos.

My third day in HK got off to a late start, I needed a morning to sleep in after all the running around.

It was at about this time that I started having some serious doubts about going to China to study. I was missing Taiwan, and a big part of me wanted to just cancel my semester in Beijing and head back to that beautiful little island with all the people I was missing, find a job and an apartment and just live for a year or two. I kept waffling back and forth, asking the opinions of those closest to me, and generally being completely indecisive of which country I was going to fly to the next morning. But eventually I came back around to going to Beijing— it’s an opportunity that may not exist for me at a later date. Taiwan will wait for me. But I can’t tell you how tough of a decision it was to make.

So with my mind made up I headed to a travel agency and booked my flight to Beijing. Next stop was to pick up my visa, and I was ready to go. My flight didn’t leave for another 24 hours though, so Nick and I had a bit more time to kill. We decided to go to Lamma Island. It was late in the day when we arrived, and we had to walk a good ways to get to the beach. But once we were there it was the perfect spot to be to relax and get my mind off of all the decisions I had made that day. We played in the waves, picked up seashells, and drank a couple of beers in the sand. It was dark a little too soon, but there was a restaurant overlooking the shore and lit up in tiny twinkling lights, so we ordered some dinner and sat on the deck with the salty air and night time breeze.

On my fourth and final day in Hong Kong I packed up to leave, then we took my suitcase to the airport to check it through. My flight didn’t leave until 8pm, but there was no way we were going to lug that massive thing around all day after I checked out of my hostel. The airport is on Lantau Island, so since were there anyways we decided to explore the area a bit more.

We got a bus over to Tai O, which is a small fishing village on the far side of the island. The unique thing about this town is that it is all built on stilts and sits on top of the water. We made our way through the market, which was stall after stall of seafood and dried fish, and found a boat to take us on a tour of the town. We steered down the waterway that went through the main part of town, mostly spying weathered fishermen untangling their lines, houses with rows of fish drying in the sun, and other boats puttering through the water. Then our tour-guide took us out of the town, through the harbor and out to the edge of the sea. Tai O is one of the only places you can find the endangered Chinese white dolphin; luck wasn’t on our side that time, though, and we didn’t spot any.

After our boat ride we found a coffee shop overlooking the water and relaxed over coffee, juice, and a souffle. It was strange as I sat there, realizing that even though I was in a remote fishing village by the end of the day I would be in Beijing. We didn’t sit there too long though; soon we were headed back to the airport so I could catch my flight.

1 Comment on “Hong Kong: and a series of last minute decisions”