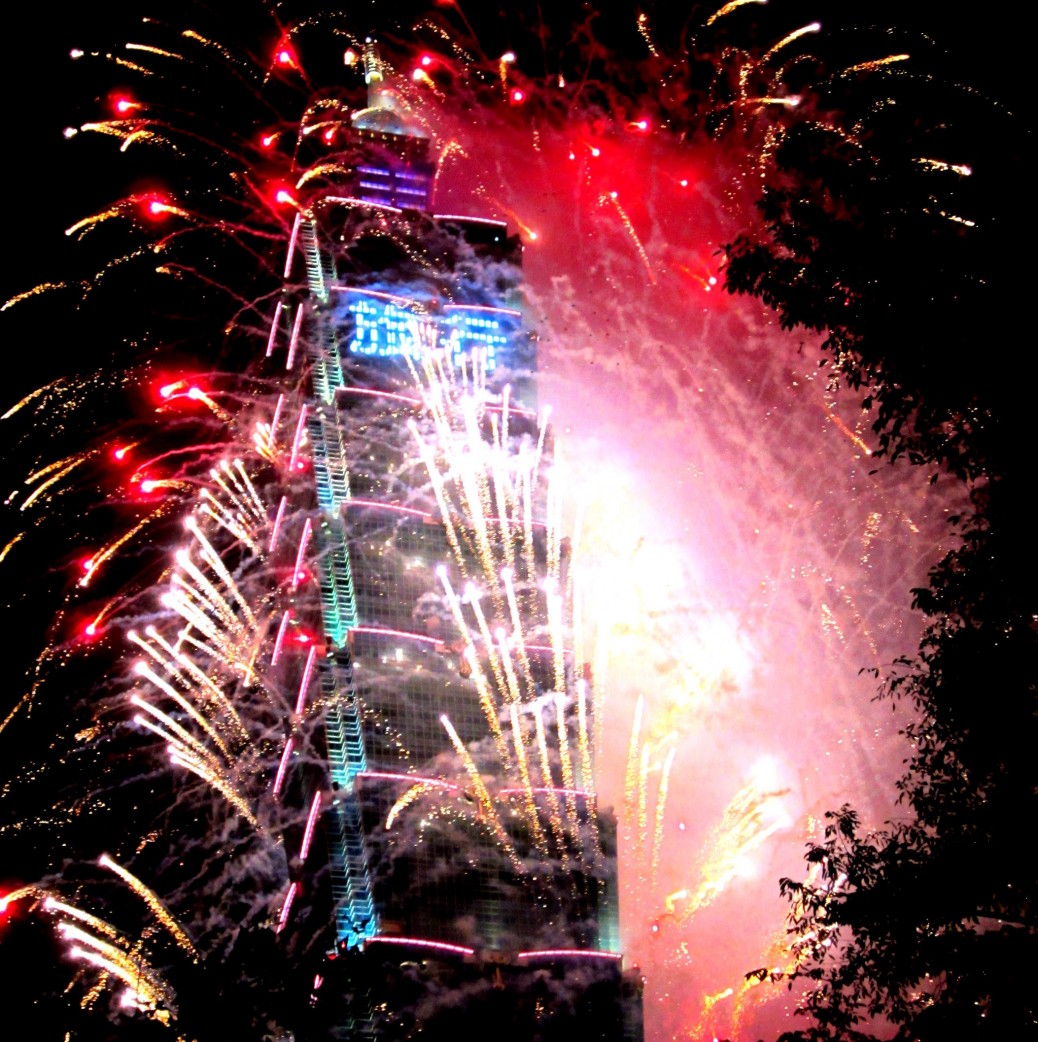 So for New Year’s Eve, Nicole and I really didn’t have a plan.

We wanted to do something, but we didn’t know what. A few friends were talking about different things but nothing was set in stone, and we didn’t want the night to pass with nothing to say for it.

And so on the afternoon of New Year’s Eve, with no planning involved, we got on a bus to Taipei.

We arrived in Taipei a little after 9, sent out a few texts asking where exactly we should head, and made our way through the densely packed subway stations to the area near Taipei 101. All the streets had been closed off to traffic, and were instead filled with hundreds of people— excited students wearing flashing devil horns and bumblebee antennas, street performers trying to teach passerbys how to dance, vendors with an array of street foods, and bubble machines spouting out streams of bubbles as little kids giddily tried to catch them out of the air.

It was almost impossible to find order in the madness, and we were trying to meet up with several friends in the crowd. We wandered awhile, but eventually accepted the idea that we’d probably not be able to find them. Instead we enjoyed the life of the night, took pictures, and hunted through the vendors’ stalls. We filled up on street food— spicy grilled sausages, corn on the cob, and onion and and pepper kebabs— grabbed some drinks, and went to find a place to watch the fireworks.

The streets with a view of Taipei 101 were packed. People had staked their claims early, and there wasn’t an inch of space anywhere. However, true to rule-abiding Taiwanese-fashion, no one was sitting on the grass. (Because, obviously, you’re not supposed to.) Well, that wasn’t quite a good enough reason for me and Nicole to miss a decent view of the fireworks. So we went over to the grass, laid down a few newspapers to sit on, and got comfy. The floodgates had been opened! Everyone who’d been trying to squeeze into the streets suddenly realized that the world would not, in fact, come to a screeching halt if you sat on the grass. Soon there wasn’t any grass space left either. We had awhile to wait, and we got to know the people around us. Then we heard someone call out our names and realized with surprise that the people we’d wanted to meet up with had found us. Everything seemed to be coming together for our plan-less New Year’s Eve.

And then in was midnight! Taipei 101, the third tallest building in the world, lit up like a candle and exploded into light as fireworks spiraled around it. The show was spectacular!!… And then it was over.

Nicole and I exchanged a glance of, “Um… is it… done?”

And then thousands of people all went at the same time to catch the last subways of the night. We decided to wait out the crowds a bit. We bought fried onion pancakes from another street vendor, took more pictures, got lost in the crowd, and eventually ended up at the subway entrance. Nope. Policemen had the doors blocked and were shouting for order as everyone tried to press through to the stairs. We laughed at the madness, and struck out down the street to get away from the throng.

We weren’t the only ones thinking that way— it was a mass exodus away from Taipei 101. A few blocks away and we were able to get into the subway entrance. We headed to the main station, checked the time, and realized that somehow 3 hours had passed— so we ended up grabbing a bus and passing out as it drove us back to Pingtung (another 5 and a half hour trip).

So yes, we traveled for roughly 11 hours to watch 3 minutes of fireworks. The best part is I don’t think either one of us regret it in the slightest.

Happy New Year to all my friends and family— in Taiwan, in America, or wherever else in the world you are. Sending my love to you all!