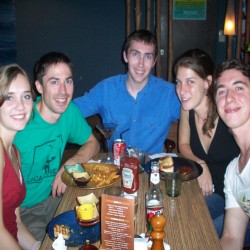 Posted by Tessa Bradford on September 2, 2011

Goodbyes are never easy, and this was a tough one. I went on one final trip to Kaohsiung with Nicole and Christine. It was a gray day, like the city and the sky were sharing in my mood.

We made a stop in the train station to get the warm crusty, buttery coffee bread that we had gotten into the habit of picking up as we passed through. (And we couldn’t resist buying one last piece as we headed back home at the end of the day as well. This is what God serves in Heaven, I swear).

We walked around the streets of Kaohsiung, then made our way to the Dream Mall, where we went for a ride on the ferris wheel on top. It was an awesome last view of the city that I had fallen in love with.

We made a stop at Formosa station, to see the colorful glass ceiling one final time. Then we headed back to school, just in time to go out and have a big meal with everyone from TUSA. It turned into drinks and a colossal photo session, as everyone tried to get a few more snapshots with each and every friend made.

The next night I went out and got dinner with Vicki and Nai Cha, my two amazing roommates. They have such opposite personalities, but they were both wonderful and I’m so thankful that I was paired with them for my two months in Taiwan. Vicki’s quiet and comforting friendship, and Nai Cha’s joyful and enthusiastic fun both played a big role in my incredible summer. Friday we had the closing ceremony. A handful of students, both American and Taiwanese, gave musical performances. There were some really talented people at TUSA this year. Youming and Sam did a skit and dance that played the role of the finale; it was very funny, and everyone loved it.

After the ceremony there was a lot more picture taking, and quite a bit of teary goodbyes and hugging and rounds of, “Keep in touch, I’m going to miss you like crazy.”

A big group of those who were still at TUSA went out for dinner that night; we had a hot pot + bbq meal that was pretty amazing. You could pick any meats of veggies you wanted, then grill or boil them, depending on what you wanted. It was one of the tastiest meals I had in Taiwan. Afterwards I went to Cafe 85 with Emily to spend a little bit more time with her. She was one of the student representatives, and was amazing to me all summer. She was always there to help me with my shoddy Chinese, or just hang out and talk.

We got back late, but just in time to catch up with a group headed to the night market to get one last bowl of mango shaved ice. The next morning I was packed up, and saying my final goodbyes to NPUE and all of my incredible Taiwanese and American friends. I had plans to catch the bus with the two Dans, Youming went with us to the train station, and we were meeting Nicole in Taipei, so at least those goodbyes were put off for a little while longer.

As we pulled away from the dorms a crowd of my Taiwanese friends chased my taxi, and I cried as I waved my last goodbyes to that beautiful place and those amazing people.

Five hours later we made it to Taipei. We unloaded our bags at Kevin’s house, then headed out for dinner. We ate at a delicious gourmet sandwich restaurant called Toasteria, which happens to be Kevin’s favorite spot. (And after a pretty incredible meal I think it’s safe to say the rest of us won’t shy away from telling anyone who cares that they need to eat there!)

It was a really good way to spend our last dinner together. As far as travel buddies go, I don’t think you could find a better group. After dinner we wandered around Taipei; we stopped at an upscale bar for awhile, where we could barely afford the drinks, then got cold Japanese noodles, and ended the night around 5:30am at McDonalds. It wasn’t the classiest way to spend our last night in Taipei, but it was fun. I love those people.

Only a few hours later and I had to say goodbye again. The exhaustion from staying up all night dampened my reaction, but I still mustered up a good cry as I gave my friends one last big hug.

I don’t know what I’ll do without them in the next year. We’ve made big plans for different reunions around the world. I hope we stick to them. Nicole, in particular, has become someone I don’t ever want to lose— as anyone who has read any amount of this blog has probably figured out— we have fun. It would not have been the same summer without her.

Before I was ready (I don’t think I could ever have been ready to leave) I was boarding a flight to Hong Kong.

Goodbye, Taiwan. You were spectacular.