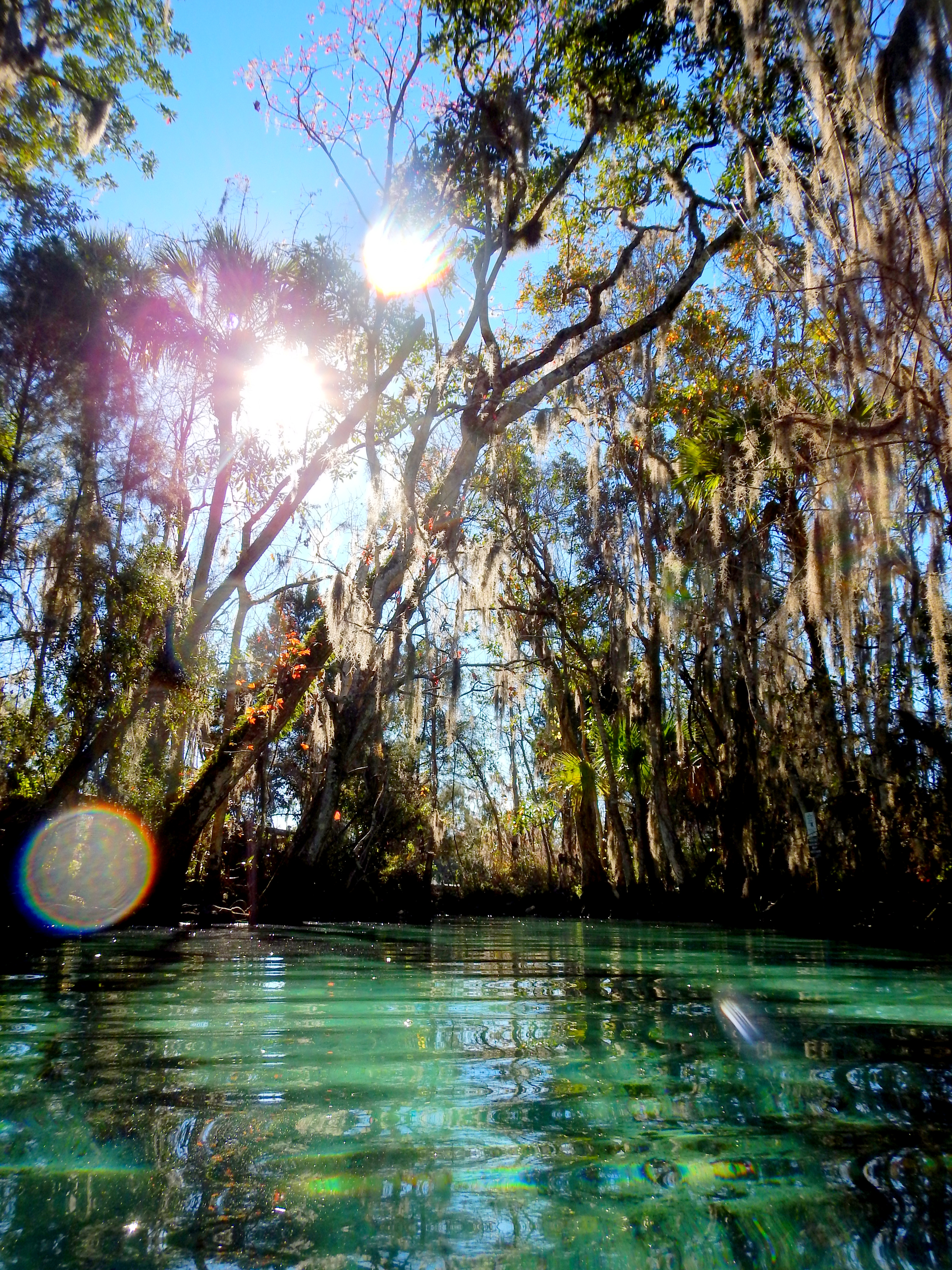 It had been two years since I had last been in America, and it was definitely time to go home for awhile.

I spent Christmas and New Year's surrounded by old friends and family. My dog remembered me and jumped like an excited puppy (despite her rather old dog-age) to greet me. I built a snowman with my grandpa and ridiculous cousins. I gave out Christmas presents from across my travels in Asia (including a bottle of Laotian snake whiskey that caused quite a stir). And I ate as much home cooked food as was physically possible.

Greeted by my pup

After the holidays had come and gone everyone returned to their normal lives. I'm not so good at staying in one spot, so I hopped on a plane and headed south, away from the midwestern snow, to visit Nicole and Kevin in Florida.

Kevin is a responsible adult these days, so he had to go to work. But Nicole and I had no such commitments and we headed out to Crystal River on a mission to swim with some manatees.

I'm not Floridian. I've barely ever been to Florida. Nicole assures me it is almost always warm in Southern Florida. However, on this particular day, it was very cold. But that's a small hurdle to overcome, right? We're talking about manatees here.

We rented a kayak and paddled through the frigid water. It didn't take long until we found the spot that makes Crystal River famous: a natural warm spring that feeds into the river. The manatees swim here to keep warm when the rest of the water turns cold.

Despite the almost-freezing air temperature the water coming from the spring stays a lovely 70 degrees all year round. So really it was no big deal to strip down to our bathing suits, tie off our kayak, and plunge into the water. Just kidding, it was terrible.

But as long as we kept as submerged as possible the temperature was alright. So we floated along like crocodiles with only our eyes above water, and swam with the manatees.

Because, the manatees! They were fantastic! They were everywhere! They were giant potatoes bobbing along through the water!

They didn't care one bit that we were there with them, they just drifted along as we dove under again and again to swim alongside them.

Eventually though, coming up for air meant our faces were beginning to resemble blocks of ice and we decided it was time to head back. We clambered into the kayak and realized that it had been much, much better in the warm water.   I decided that my best bet was to completely change out of my suit and into my clothes. Nicole decided that it was her best bet to get back to the kayak-rental dock as fast as humanly possible. These two goals conflicted, quickly and to my horror.  As I stripped off my icy suit, she paddled with all the energy she could muster.

Crystal River is lined with houses, and we were zipping past them as I tried to change as fast as I could with numb fingers. Nicole took pity on me and steered into the shore, behind a cluster of trees so I could finish the job. We paddled back to the dock in tandem at lightning speed.

The next day we headed over to Orlando where we met up with Kevin's best friend, Sven. Because we were going to Harry Potter World!

Or rather, Orlando Studios. But let's be honest here, we were going to Harry Potter World!

I got a wand and everyone feared me and my terrible power. I drank butterbeer at the Three Broomsticks. I ate a chocolate frog and collected a Rowena Ravenclaw card. I met up with Harry and co. and basically saved Hogwarts.

Butterbeer in the Three Broomsticks

And to be fair, we definitely made the rounds of the rest of the park. I can't say no to a rollercoaster to save my life, and I was in good company. There were also some dinosaur escapades and general nonsense.  It was a good day.

That night we headed to a video game bar, where they have just about every  console and old-school arcade game imaginable combined with alcohol. Master Chief told me I was good at Galaga, and that made up for the fact that Kevin beat me at Soul Caliber.

It wasn't a long trip, but it was pretty fantastic. And it gave Nicole and I a chance to finalize some of our next plan: backpacking Europe and making our way to Mongolia. Because that was all only a few weeks away.