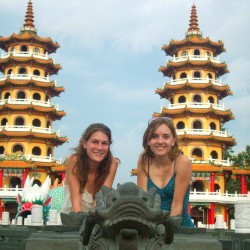 Nicole and I had talked Jessica, Dan and Daniel (and a Taiwanese friend as well, English name Bam) into agreeing to go back to Kaoshiung. So we headed off around 10am, caught a bus then a train then a subway. We ate some lunch in the very westernized shopping district, then hopped the subway again to check out their Central Park. It was beautiful, and by then it was already after 3pm. We headed towards the north of the city, where we discovered rentable bikes, and our day was made. We rode the bikes across the city, and officially decided it is the best way to see Taiwan.

We headed to Lotus Lake, which is a lake that is surrounded by temples, shrines, and pieces of art all along the shoreline. It was fantastic, and the weather was perfect for us.

There was an electric cable wake boarding group zipping back and forth across a cove, and they offered the guys a chance to try it, so we sat bey the water watching the wakeboarders, and both Dans gave it a shot.

Then we continued around the lake on our bikes, and on the far side we started finding the temples and shrines. There were two towers that overlooked the water, that were guarded by a giant dragon and tiger. There was also several shrines to different gods and Buddhas; all of them were spectacular.

We grabbed a quick noodle dinner, then spent more time out on the lake at the different shrines, then finally headed back to where we rented the bikes.

From there we split up; Nicole and I wanted to stay awhile longer, but the rest headed back to campus. We caught the subway back into the Central Park, then wandered around the city looking for a night market. We found a map and a helpful English speaking man to point us in the right general direction, but we’d about given up when we finally stumbled upon one.

It was the most crowded market I’ve been to yet, but we got some chopsticks, and I bought a small clay teapot. Then we got some ice cream— mine was vanilla in a cup of sweet black tea (a lot like a root beer float), then we found some chocolate filled pancakes. Basically we just needed things with sugar to satisfy some major sweet tooth cravings.

Around 10pm we headed back towards Pingtung. When we arrived, we decided we would rather walk back to campus than get a bus or taxi. We got a bit lost, though, and tried asking directions from a little old woman on the street who didn’t speak a word of English. She was mostly interested in selling us old flowers for $100. So we just kept walking, and when we spotted a taxi decided that it really was our best bet. We hopped in and got to campus just as it started to sprinkle. A minute later and it was an absolute downpour that may qualify to be labeled as a monsoon. We sprinted back to our dorms, thankful we’d opted for the taxi at the last moment!

It was great wandering around by ourselves and really seeing and experiencing Taiwan today.

It is definitely a beautiful place.